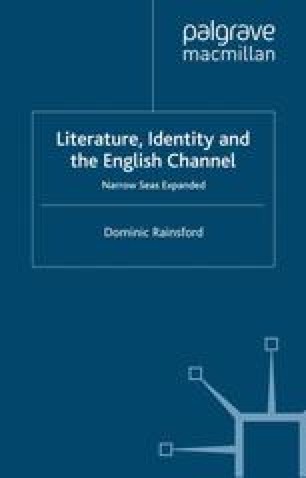 Literature, Identity and the English Channel pp 155-159 | Cite as

It is time to assess what can be learned from this survey of the Channel in the English and French literature of the last two hundred years. It is clear, to start with, that the Channel has been significant in both literatures. It is clear also that the status of the Channel differs considerably according to the side from which it is viewed. Also, communication between French views and English ones is sporadic. The French texts that have had most to say about the Channel (by Chateaubriand, Michelet, Hugo and others) are currently neglected in Britain. On the other hand, there is probably no major French writer since Voltaire who has shown the same level of interest in the process of crossing to England that Wordsworth, Dickens, Swinburne or Julian Barnes have shown in crossing to France.1 Britain has a very long history of dominance at sea: the Channel has all sorts of proud associations for the English, and relatively few for the French. It is likely that historical facts such as these are what underlie the asymmetries of interest in the Channel, rather than innate national dispositions.

French Literature Sensitive Commentator Channel Tunnel French Text Mutual Alignment
These keywords were added by machine and not by the authors. This process is experimental and the keywords may be updated as the learning algorithm improves.
This is a preview of subscription content, log in to check access.