Economic Thinking of Arab Muslim Writers During the Nineteenth Century 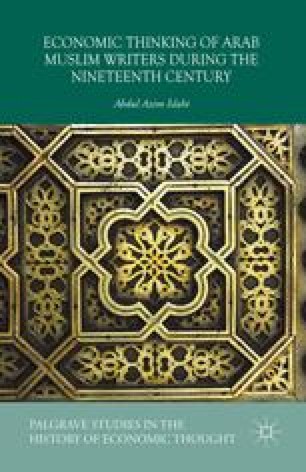 The end of the eighteenth and the beginning of the nineteenth centuries CE commenced with Bonaparte’s occupation of Egypt in 1798. Although the French were later forced to withdraw as a result of British intervention in 1801, the occupation’s impact on Muslim society and culture was nonetheless far-reaching. It showed, for example, that the Ottomans alone were incapable of defending their Arab components. Naturally, this led, in turn, to a diminution of the Ottomans’ influence in the region. On two occasions, in 1832 and in 1839, Ottoman forces were even defeated in battle by the Egyptians, the latter even penetrating deeply into Anatolia. European powers, however, saved the sultan and forced an Egyptian retreat. However, from 1789 to 1909, the Ottoman throne saw six sultans,1 each of whom initiated various reforms to arrest the decaying power and prestige of their empire — once the world’s only superpower.

Nineteenth Century Arab World Economic Thinking Arabic Language Suez Canal
These keywords were added by machine and not by the authors. This process is experimental and the keywords may be updated as the learning algorithm improves.
This is a preview of subscription content, log in to check access.