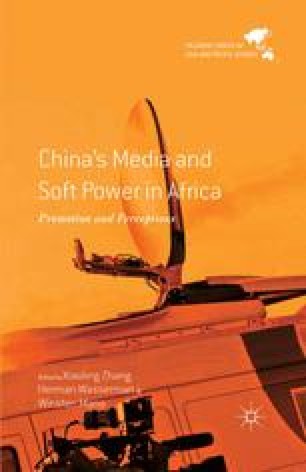 China’s quest to improve its international image has increased exponentially in the last decade through cultural diplomacy and the media. In recent years, both state-owned and private Chinese media have been increasingly visible in Africa, with the aim to further strengthen the understandings between China and the African continent, and to be the alternative but authentic storytellers of China and Africa in what Guo Zhenzi and Lye Liang Fook (2011) describe as a “Going Out Campaign” aimed at extending China’s soft power. Therefore, rather than simply rebutting the Western media’s overly critical and biased reporting of Sino-African relations, China’s state-led media are making efforts to produce their own content for African consumption. China’s expanding media presence is an exercise in soft power to increase international influence, and the Chinese government hopes to shape and construct the narrative that tells the story of China in Africa from a Chinese perspective, and also for the more balanced story of Africa to be told to China and the rest of the world (Li, 2013).

African Country Chinese Medium Central African Republic Soft Power African Union
These keywords were added by machine and not by the authors. This process is experimental and the keywords may be updated as the learning algorithm improves.
This is a preview of subscription content, log in to check access.