The Contribution of Human Capital towards Economic Growth in China 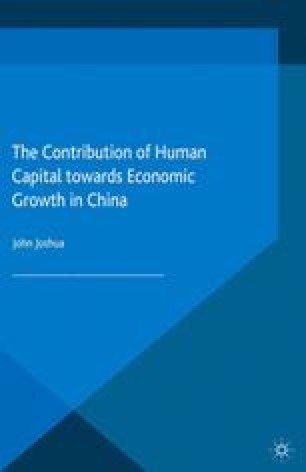 The last chapter provided an economic profile of China, discussing China’s growth experience throughout various reform periods, and also identifying China’s growth engines of its economy and the spillover effects. It was shown that the benefits of China’s growth have been unevenly distributed amongst the provinces. The provinces which benefited most were the coastal provinces, especially around the Zhujiang Delta. The previous chapter discussed the main contributing factors leading towards greater inequality of provincial growth and unequal income distribution in China, such as the fact that most exports come from the coastal provinces and most FDIs are also situated in these provinces. The open-door policy further contributed towards inequality of income between the coastal and inner provinces. China’s move towards the international technological frontier and China’s technological take-off has also been briefly addressed.

Human Capital Total Factor Productivity Spillover Effect Dynamic Economy Coastal Province
These keywords were added by machine and not by the authors. This process is experimental and the keywords may be updated as the learning algorithm improves.
This is a preview of subscription content, log in to check access.