The Globalization of Asian Cuisines 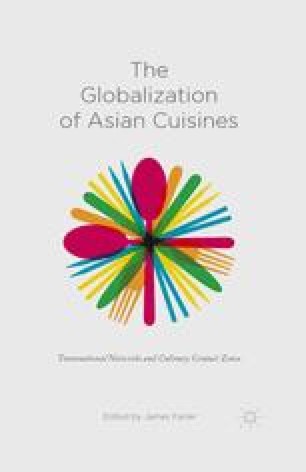 A “China Shanxi Food Festival in New York” took place on May 5–9, 2014. It opened with a food gala at the United Nations headquarters prepared by 16 chefs selected from the sixty thousand restaurants across North China’s Shanxi Province. The UN UnderSecretary-General and former Indian ambassador to China Vijay Nambiar tried his hand at making the province’s iconic knife-shaved noodles. “In many ways, cuisine and food culture are two aspects of a great civilization,” he said. “From that point of view, it’s a great and unique opportunity to be able to come here and taste the flavors of the hallmark of Chinese food culture. Today we are witnessing some of the fundamental items of Chinese cuisine, which have made it justly famous around the world.” The festival was hosted by the Shanxi Ministry of Commerce, in cooperation with provincial and national cuisine and industry associations. Other festival events were a noodle cooking performance at Manhattan’s Sun Restaurant, a Sino-US Industry seminar at the Sheraton Hotel in Flushing, Queens, and a Shanxi cooking and tasting event at New York University. The purpose of all this, according to Sun Yuejin, head of the Shanxi Ministry of Commerce, was to “help Shanxi food find its way in the world and [it] is a good way to promote its cuisine and particular characteristics and give the province a more international image” (China Daily 2014).

Provincial Government Qing Dynasty Shanxi Province Chinese Restaurant China Daily
These keywords were added by machine and not by the authors. This process is experimental and the keywords may be updated as the learning algorithm improves.

This research was made possible by a grant from the Japanese Society for the Promotion of Sciences, Grant No. 22402040, “Sociological Research into Culinary Soft Power and Culinary Contact Zones.” For arranging interviews at the restaurants in Shanxi I am grateful to Yao Chaocheng and thank Wang Chuanfei and Tong Liu for their research assistance.