Curators of Cultural Enterprise: A Critical Analysis of a Creative Business Intermediary 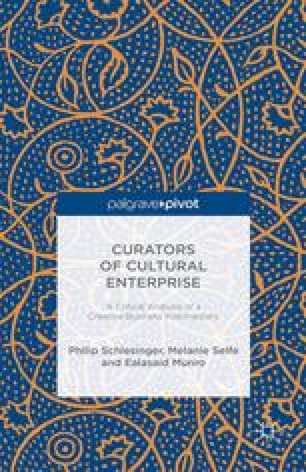 Curators of Cultural Enterprise: A Critical Analysis of a Creative Business Intermediary pp 81-103 | Cite as

This chapter addresses CEO’s strategic development during 2013–2014, aided in part by targeted funding. In a bid to future-proof the organisation in an increasingly competitive business support landscape, CEO was restructured. It began to develop critical independent research, and sought to re imagine modeh of digital and physical service delivery. The bid for further Creative Scotland funding that would have enabled the more ambitious plans to be pursued was unsuccessful. This chapter explores the development of new goals when their realisation was still thought feasible, considers internal transformations observed in CEO as it attempted to prepare for this next phase, and reflects on the tension between serving and shaping the top-down policy agenda. The chapter contains a statement from the Director on her departure.