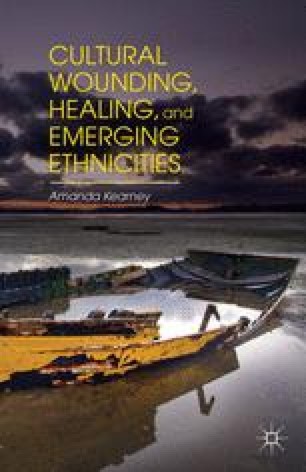 In Australia, since the 1990s, a particular discourse, largely public, yet also academic and political, has found traction in debates concerning identity, ethnicity, multiculturalism, belonging, and the Australian nation. This has been marked by divisive celebrations of revisionist histories and, more recently, by allegations of ethnic inauthenticity for people claiming their identity along lines of Indigenous descent. So too, the nation has witnessed the reclamation of patriotism in the aftermath of racist conflicts, critique, and stalemates on asylumseeker policy, Facebook pages denigrating Aboriginal Australians, and a deeply wounding language captured by expressions such as “white is the new black,” “it’s so hip to be black,” “boat people,” and “queue jumpers.”1 As in all nations marked by histories of interethnic conflict and waves of migration in the postwar era, the road to reconciliation remains littered with potholes. Writing into this space, many have identified tensions in interethnic relations, the legacies of colonization, and present anxieties over nationalism, multiculturalism, and what Hage (1996) refers to as nation building practices akin to “domestication” (Cowlishaw 2012; Cowlishaw and Morris 1997; Fozdar et al. 2009; Hage 1998, 2003; MacIntyre and Clark 2003; Soutphommasane 2009, 2013; Sutton 2009). Domesticating a nation’s constituents, as a population made up of various ethnic citizenries, is a process guided by national imaginaries in which certain identities, ideals, and expectations are privileged. How difference will be understood in these nationalist efforts is a historical and contextual affair, bound to ideologies of who belongs, who can be tamed, and who simply cannot fit. How this maps onto wounded spaces is of particular interest in this and the following chapter.

Young People Indigenous People Ethnic Identity Aboriginal People Torres Strait Islander
These keywords were added by machine and not by the authors. This process is experimental and the keywords may be updated as the learning algorithm improves.
This is a preview of subscription content, log in to check access.