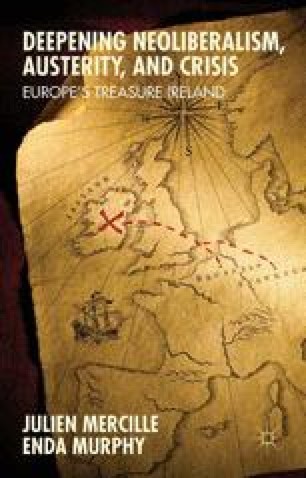 Neoliberalisation has always been about freeing capital from regulatory and institutional constraints. This enables capitalists to gain greater power over not only systems of exchange but also the state itself, and by extension the general population. This chapter demonstrates the role of the taxation system in advancing the neoliberal agenda. Although Ireland’s taxation system has never been progressive by Western standards, it has been reworked considerably under neoliberalisation. Thus, the contemporary system is one which overwhelmingly benefits and indeed empowers corporate interests and the wealthy at the expense of the general population. On the corporate side, taxation policy has seen a reduction in the headline and effective rates but it has also witnessed the roll-out of legislative arrangements which actively facilitate tax avoidance by multinationals.1 On the general taxation side, there has been a significant move towards less progressivity in the income tax system while indirect taxation, in particular, has become a more important component of revenue generation. When taken together, these arrangements have served to exacerbate income and wealth inequality in Ireland.

European Union Gross Domestic Product Transfer Price General Taxation System
These keywords were added by machine and not by the authors. This process is experimental and the keywords may be updated as the learning algorithm improves.
This is a preview of subscription content, log in to check access.