The Life of a Kashmiri Woman: Dialectic of Resistance and Accommodation 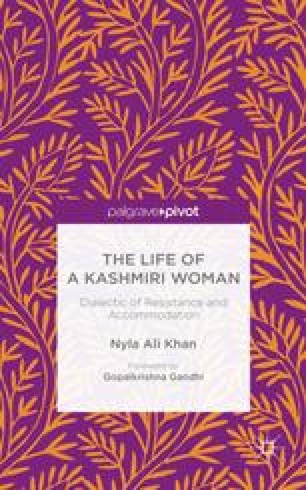 The Life of a Kashmiri Woman: Dialectic of Resistance and Accommodation pp 56-66 | Cite as

During the ignominious Kashmir Conspiracy Case in 1958, the Ministry of Home Affairs [India] and its intelligence agencies worked assiduously to not just indict Akbar Jehan, the Sheikh, and their trusted colleagues, but to get them harshly convicted as well. In order to legitimize the crackdown on the blossoming political consciousness of Kashmir with unprecedented brutality, the Ministry of Home Affairs [India] in collusion with the Intelligence Bureau conspired to criminalize the political activities of the Sheikh, Akbar Jehan, and the Plebiscite Front. Ironically, the re-arrest of the Sheikh in 1958 and the harassment of Akbar Jehan created a constituency for his and Akbar Jehan’s politics in those parts of the world that had lent moral support to India’s glorious struggle for freedom in 1947. World opinion leaned toward equal rights and the self-determination of peoples.

Prime Minister Home Affair Political Consciousness Moral Support Preventive Detention
These keywords were added by machine and not by the authors. This process is experimental and the keywords may be updated as the learning algorithm improves.
This is a preview of subscription content, log in to check access.