The Psychopolitics of the Oriental Father 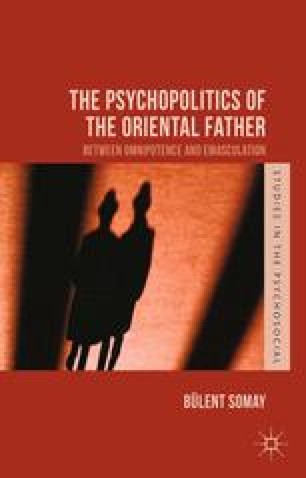 The Psychopolitics of the Oriental Father pp 17-39 | Cite as

Is East East and West West?

There are three main themes insistently pursued throughout the course of this book, in an endeavour to provide evidence for a critique of the seemingly self-evident and ‘essential’ East/West dichotomy. The first is that there is no such thing as the Orient (a variation on/perversion of the famous/notorious Lacanian statement that ‘La femme n’existe pas’ [‘The Woman does not exist’]); the second is that insofar as the Orient ‘exists’, it is, just like its inevitable opposite twin, the Occident, nothing but a performative (a variation on/perversion of Judith Butler’s assertion that ‘Man’ and ‘Woman’ as genders are performatives); the third is that the Oriental and Occidental performatives chronically create a third one, that of the Oriental Transvestite, akin to that of the child or, alternatively, the drag, also a variation on Butler’s assertion of the drag as a transgressive (although not necessarily a subversive) performance. As becomes instantly apparent, these claims seem to rely heavily on a categorical analogy between the Orient and femininity (and the West and masculinity), which is already present in the germinal critique of Orientalism, namely, in Edward Said’s path-breaking book, Orientalism:

The Orient was Orientalized not only because it was discovered to be ‘Oriental’ in all those ways considered commonplace by an average nineteenth-century European, but also because it could be—that is, submitted to being—made Oriental.

Gender Identity Dualistic Structure Marriage Ceremony Material Circumstance Performative Utterance
These keywords were added by machine and not by the authors. This process is experimental and the keywords may be updated as the learning algorithm improves.

Oh, East is East, and West is West, and never the twain shall meet,

Rudyard Kipling, The Ballad of East and West