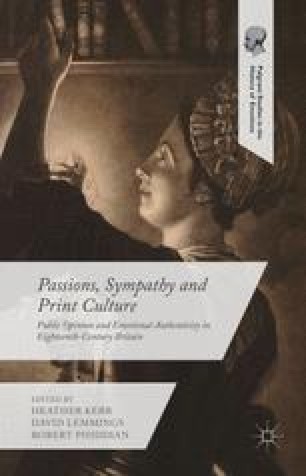 By modern standards, suicide was remarkably ubiquitous in the English eighteenth-century press. By mid- to late century, the frequency of suicide featuring in the popular press — in news reports, correspondence, essays, satirical pieces, and fictional vignettes — helped to establish two significant prevailing perceptions: that suicide formed a distinctive feature of the English national character, and that the scourge had reached unprecedented levels. As one observer remarked in 1772, suicide was perceived to be more frequent in England than in any other country’, and it was seen to be a melancholy truth, that it has of late been more frequent here than at any former period’.1 The nation, it appeared, was facing an unparalleled social crisis.

Popular Press Moral Sentiment Moral Indignation Social Rehabilitation Suicide Note
These keywords were added by machine and not by the authors. This process is experimental and the keywords may be updated as the learning algorithm improves.
This is a preview of subscription content, log in to check access.