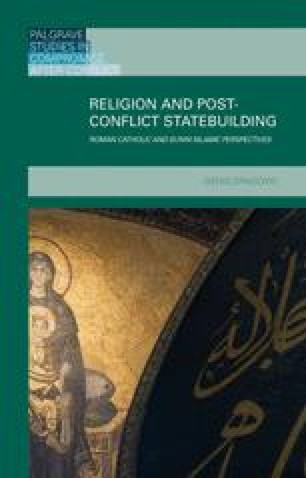 Earlier I argued how salvation could be seen as the primary theological driver for the Catholic Church to involve itself in supporting post-conflict statebuilding. Within Islam I have not found any suggestion in the Qur’an that would indicate that Allah wants all, or even most, people to enter Paradise. Nor have I found others who have put forward a credible case that argues any numerical preference. Quite the contrary, in some passages it becomes evident that Allah foresees a majority not entering Paradise (see for example 17:62–63; 32:13). It seems that there is a widely held presumption that Allah desires all of humanity to enter Paradise, but this view is not based on any scriptural foundation in the Qur’an or hadith. In fact, how many will be chosen is left indeterminate.

Public Security Religious Institution Muslim Community Religious Scholar Legal Validity
These keywords were added by machine and not by the authors. This process is experimental and the keywords may be updated as the learning algorithm improves.
This is a preview of subscription content, log in to check access.