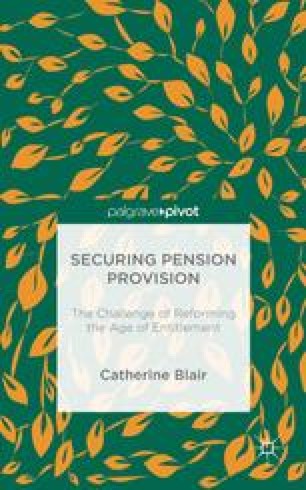 Securing Pension Provision: The Challenge of Reforming the Age of Entitlement pp 83-97 | Cite as

Acting and Reacting: The Public-Private Interplay in Pensionable Age Reforms

This chapter depicts the various links between the public and private sectors for state pension age reforms. Retirement decisions may be affected differently by state pension age reforms depending on the structure of pension systems, that is, the proportion of retirement income provided for by the state, compared to occupational/private pensions. That said, the secondary aims of such reforms concern the private sector: governments attempt to signal to both the population and private pension providers that life expectancy is increasing and individuals should at least partly offset this development by working longer. However, the state runs up against limits to its regulatory potential: private providers might themselves be reacting to the external constraints of longevity and investment risks, rather than responding directly to state pension reforms.

Cite this chapter as:
Blair C. (2014) Acting and Reacting: The Public-Private Interplay in Pensionable Age Reforms. In: Securing Pension Provision: The Challenge of Reforming the Age of Entitlement. Palgrave Pivot, London. https://doi.org/10.1057/9781137453976_7