The Theatre of the Occult Revival 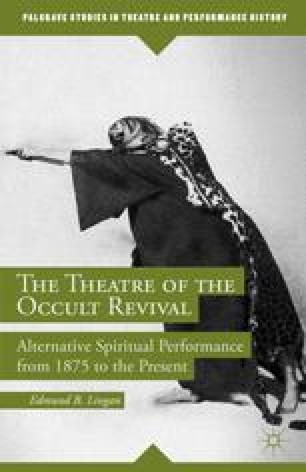 Point Loma, California, which is a few miles west of San Diego, was once the site of what could justifiably be considered the most elaborate US experiment in occult theatre. Between 1897 and 1929, this multi-acre plot of land was developed and overseen by Katherine Tingley (figure 2.1), the leader of the Universal Brotherhood and Theosophical Society (UBTS). Tingley had hundreds of followers who chose to live on the property of the UBTS headquarters, which the residents lovingly referred to as “Lomaland.” In addition, Tingley had hundreds of followers in the United States and abroad who participated in other lodges of the UBTS. The residents of Lomaland enjoyed a breathtakingly beautiful landscape located on cliffs that overlooked the Pacific Ocean. One of the most-striking buildings at Lomaland was the Greek Theatre, which was most likely the first replica of an ancient, outdoor Greek theatre to be constructed in the United States. This theatre, which still stands on what is now the campus of Point Loma Nazarene University, is a Parthenon-like structure with a round orchestra and hillside bench seating. This is only one of several architectural wonders and sites of performance that once graced the UBTS headquarters in Point Loma. The Greek Theater is an aesthetically beautiful reminder of the centrality of theatre, drama, and performance within the daily life and spiritual practices of Katherine Tingley and her followers between the late nineteenth and early twentieth centuries.

Audience Member Photo Courtesy High School Program Spiritual Education Divine Source
These keywords were added by machine and not by the authors. This process is experimental and the keywords may be updated as the learning algorithm improves.
This is a preview of subscription content, log in to check access.

Cite this chapter as:
Lingan E.B. (2014) Katherine Tingley and the Theatre of the Universal Brotherhood and Theosophical Society. In: The Theatre of the Occult Revival. Palgrave Studies in Theatre and Performance History. Palgrave Macmillan, New York. https://doi.org/10.1057/9781137448613_3