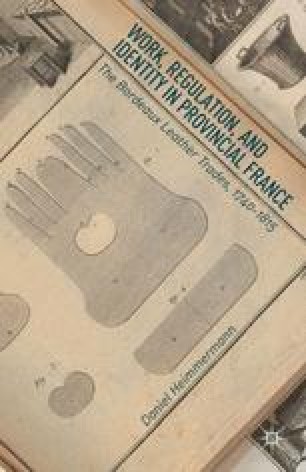 Work, Regulation, and Identity in Provincial France pp 171-199 | Cite as

Reform, Revolution, Abolition, and Beyond

On October 27, 1790, while the National Assembly was deliberating the fate of the French guilds, municipal officials in Lyon informed their counterparts in Bordeaux about two letters received by the Lyonnais trade corporations from the Bordeaux guilds. The correspondence “denoted a spirit of insurrection” against the liberal decrees of the National Assembly.1 Although the suppression of guilds had not been included in the law of August 11, 1789, that abolished the special privileges and entitlements of the various corporate groups, the Bordeaux guilds feared that the reforming spirit of August 4, which already had prompted journeymen to rebel against their masters, ultimately would lead to the final abolition of the corporate system. In an effort to forestall such an eventuality, on February 26, 1791, the Bordeaux guild masters along with those of Toulouse presented a joint request to the king asking for the maintenance of the trade corporations. Several Bordeaux guilds elected a “secrétaire des corporations de Bordeaux” who claimed to represent 18 Bordeaux guilds and invited each trade community to send representatives to a general assembly in order to draw up a request to the National Assembly.2 Despite the increasing dislocation of the trade corporate system, three weeks before their official suppression, the Bordeaux guilds and those of other towns remained committed to the corporate organization of work and took initiative to organize and unite to meet the threats to their way of life.

Eighteenth Century Political Order Corporate Group Analogous Trad Special Privilege
These keywords were added by machine and not by the authors. This process is experimental and the keywords may be updated as the learning algorithm improves.
This is a preview of subscription content, log in to check access.