Atheist Secularism and its Discontents 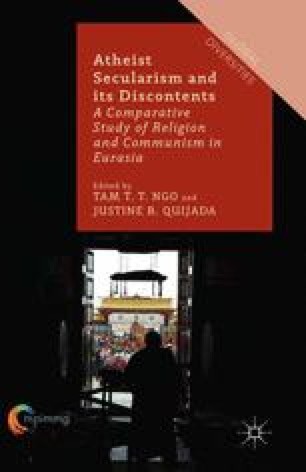 Atheist Secularism and its Discontents pp 134-151 | Cite as

Was Soviet Society Secular? Undoing Equations between Communism and Religion

Socialist societies were dedicated to being secular in the sense of excluding gods and spirits from social dynamics, but their extraordinary promises also called for faith-talk. “In our radio show we heard from the workers of the wood-processing plant of the Mari Construction Trust. They talked about their faith in people, in the collective, their faith in the beautiful future of humankind: communism.”1 This line from an atheist radio show produced in an autonomous republic in Russia’s Volga region in 1972 could have been recorded during almost any decade of Soviet rule, and probably in other socialist countries as well. An East German philosophical dictionary defines faith or belief as “holding something to be true although the grounds for it are insufficiently known, or not known at all” and notes that accepting the truth of facts and circumstances that lie beyond one’s experience is part of everyday life. Rather than thinking of faith as necessarily religious, the dictionary asks readers to recognize the “orienting and mobilizing powers” of “the faith of progressive forces in the necessity and righteousness of their struggle, […] in their strength and final victory” (Kosing, 1987, p. 224).

Communist Party Mari Construction Religious Believer Soviet Society Autonomous Republic
These keywords were added by machine and not by the authors. This process is experimental and the keywords may be updated as the learning algorithm improves.
This is a preview of subscription content, log in to check access.