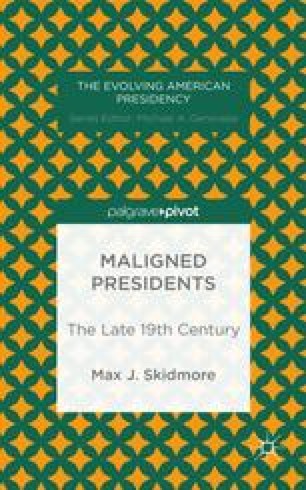 Cleveland was the only president to serve two terms that were not consecutive. Despite being nonconsecutive, his second term was fraught with difficulties as many presidential second terms have been. He faced severe economic disturbances, and his rigid ideology was inappropriate to deal with the depression. In labor disturbances, he used government’s power to support employers, and thus earned labor’s hatred. His own party all but disowned him. Still, he retained the authority of the presidential office, and did not weaken it, and he avoided strong partisanship by keeping the Republican reformer, Theodore Roosevelt, on the Civil Service Commission. It was a difficult presidency, but not a weak or subservient one.

Electoral Vote Democratic Nominee Presidential Office Labor Unrest Interstate Commerce
These keywords were added by machine and not by the authors. This process is experimental and the keywords may be updated as the learning algorithm improves.
This is a preview of subscription content, log in to check access.