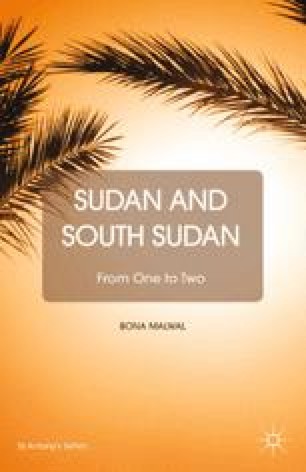 South Sudan: The Beginning of the Struggle for Political Emancipation, 1947–2004

The current government of the newly independent South Sudan has extended the date of the political struggle of the people of South Sudan to the beginning of the 19th century. The political slogans of the government in Juba say that the struggle of the people of South Sudan dates back to the 1820s.1 It is known that in the Turko-Egypt period in Sudan the people of South Sudan, of disparate ethnicities, were struggling against foreign occupation of their lands and against slavery, without politics playing any role. Political struggle is possible only by those who know what they want politically, and there were no educated South Sudanese at that time. Egypt and Britain, the colonial powers in Sudan, were not concerned with educating the South Sudanese. The British wielded the majority of colonial authority over the entire country, while Egypt was happy to play a secondary colonial role as long as Britain fully recognised that its public colonial civil servants in Sudan were agents of both Britain and Egypt. Egypt’s long-standing interest in Sudan was always the waters of the Nile. It remains a fact of life for Egypt that without the Nile waters there is no Egypt.

Assistant Director British Colonial Political Struggle Colonial Power Nile Water
These keywords were added by machine and not by the authors. This process is experimental and the keywords may be updated as the learning algorithm improves.
This is a preview of subscription content, log in to check access.