Cameron’s Conservatives and the Internet: Change, Culture and Cyber Toryism 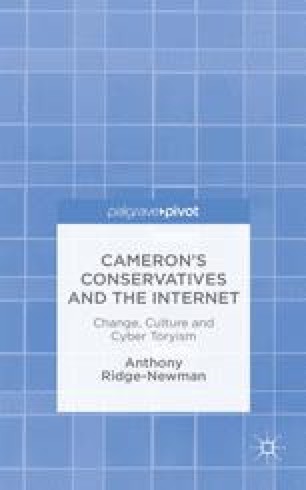 Cameron’s Conservatives and the Internet: Change, Culture and Cyber Toryism pp 36-47 | Cite as

Chapter 3 explores some pertinent examples of phenomena in the Tory blogosphere, including the potential pitfalls of using the microblog platform Twitter. The chapter focuses on the place of the ConservativeHome blog in contemporary Conservative organization. The role of prominent individuals like ConservativeHome’s founder, Tim Montgomerie, is examined. The chapter identifies that Montgomerie and others benefitted from raised profiles through engagement in Cyber Toryism and subsequently filled niches in cyberspace that elevated them to a new elite status. It is argued that ConservativeHome is an example of Cyber Tory leadership that helped catalyse change from the grassroots upward and, in turn, it steered aspects of central party change in the form of greater internal transparency.