The Palgrave Handbook of Posthumanism in Film and Television 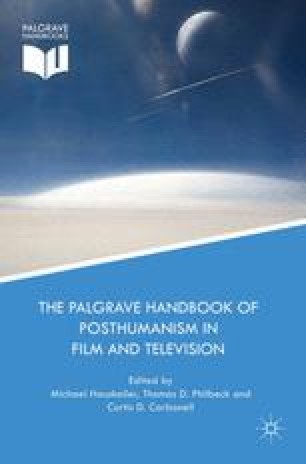 Anthony Vidler wrote that William Gibson’s novel Neuromancer ‘voiced a peculiarly contemporary sense of haunting: that provoked by the loss of traditional bodily and locational references by the pervasive substitution of the simulated for the real in the computer’s virtual reality’ (Vidler 1992, 10). Published in 1984, Neuromancer provided a narrative that intensified, and gave a subcultural twist, to the buzz of possibility surrounding computing technology. Gibson’s novel rode on the entry of computer-based games into the domestic marketplace, working a populist seam to create an accessible, plot-driven tech-noir fiction through which games become synonymous with virtual reality. Central to this is the fantasy of escaping the bodily and spatio-temporal confines that construct the human condition. If the TV show Star Trek helped to make funding for NASA palatable by creating a desire for space exploration (Penley 1997), then Neuromancer contributed to the creation of a sensationalizing mythos that transformed computational technology into, at once, a new frontier and a seductive means of escaping entropy and acquiring superpowers. Fuelled by the power of this mythos, science fiction (SF), art, philosophy and critical theory have found a point of convergence, occupying a shared domain that Steve Nicholls (1988) claimed as posthuman.

Virtual Reality Science Fiction Digital Game Progressive People Playable Character
These keywords were added by machine and not by the authors. This process is experimental and the keywords may be updated as the learning algorithm improves.
This is a preview of subscription content, log in to check access.