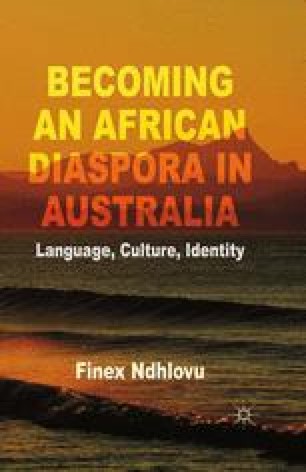 Becoming an African Diaspora in Australia pp 1-35 | Cite as

This book is a transdisciplinary study that straddles the fields of sociolinguistics, migration studies, historical studies, intercultural studies and race and ethnic studies. It draws on data from five years of field work with African communities in regional and metropolitan Australia to provide new empirical and theoretical insights into how transnational identities and interests of small migrant populations can be pushed to the forefront of global identitarian debates. The book tells previously untold stories about the complex cultural, linguistic and political identities of African migrants in Australia and calls for a fresh look into the changing meanings of culture and identity in diasporic contexts. The number of people of African origin in Australia has grown extremely rapidly over the last two decades from a very small base. Australian Bureau of Statistics (ABS) census data indicate that the number of people born in Africa rose from about 250,000 in 2006 to around 338,000 in 2011, representing an increase of 35.2 per cent within a period of five years (ABS, 2007, 2012). Most African immigrants come from multilingual communities and bring with them a rich repertoire of of both homeland languages and ones acquired in transit. This means people of African descent living in Australia are an extremely diverse group, reflecting the linguistic, cultural, ethnic and political diversity of their continent of origin, and also their different immigration trajectories, histories and life journeys as migrants and as refugees.

Conceptual Issue Identity Narrative African Migrant Global Village Refugee Background
These keywords were added by machine and not by the authors. This process is experimental and the keywords may be updated as the learning algorithm improves.
This is a preview of subscription content, log in to check access.