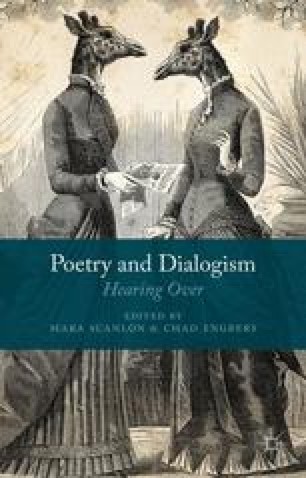 With its multi-voiced arena, extreme word play and remixing of images and voices, Harryette Mullen’s 81-page poem Muse & Drudge is anything but easy. Sometimes the complexities of the text spin with such speed that readers wonder if they have inadvertently skipped lines or missed something crucial to interpreting the text. But the quick movement and constantly changing points of view are, in fact, the point—the crux of the poem’s dialogic drive that emulates the social worlds in which we live. With its meeting ground of numerous subjective (and therefore ideological) positions, Mullen’s poem produces new patterns that recognize and alter the subjugating narratives and ideologies that continue to pervade American culture, media, and history. More specifically, Mullen creates a double play of ventriloquy in Muse & Drudge to project the subjective positions of both the oppressor and the oppressed (and everything in between); in doing so, the text throws out the polarities of culture’s rigged and racial typecasts and replaces them with a multidimensional matrix of possible selves. As these various perspectives become more defined and yet simultaneously altered through their engagement with one another, they begin to reshape the invisible power of habitual thought and media consumption that so often leads to unrecognized or unacknowledged (and therefore more insidious) forms of subjugation.

Black Woman Ideological Position Ideological Perspective Text Spin Lyric Poetry
These keywords were added by machine and not by the authors. This process is experimental and the keywords may be updated as the learning algorithm improves.

“A people is many individuals.”