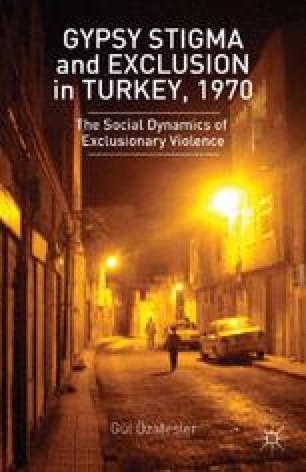 The Forced Dislocation: From Drivers’ Feud to Gypsy Hunt

The Gypsy category with all the negative images and prejudices it conveys may blind us to the process and the dynamics that transformed “our Gypsies” into “evil Gypsies.” It is crucial to understand how the people who were considered to be Turkish and included in society more or less became reduced to being only Gypsies. This process of stigmatization, and creating a “master status,” excluded Gypsies from Turkishness. It makes clear how and why the categories become functional and what role they played in the attacks. In this study, I have applied a multilayered analysis, which focuses on the historical constructions of the stigma, on more structural forces, and on the role of agency.

Social Control Social Distance Security Force Master Status Historical Construction
These keywords were added by machine and not by the authors. This process is experimental and the keywords may be updated as the learning algorithm improves.

It was like how the grain grew, we did not question it, some conflicts happened and the Gypsies just left.1