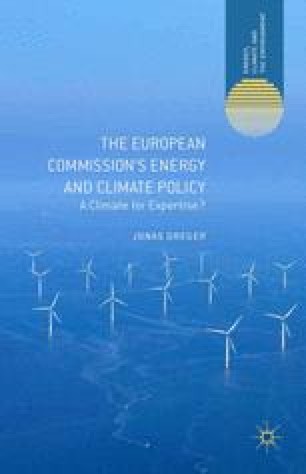 Conclusion: The Commission as a Catalyst between Knowledge and Politics

Chapter
Part of the Energy, Climate and the Environment Series book series (ECE)

At the beginning of this work, I pointed to the existence of two different cities or worlds, as described with fine humor by Pal. Science was characterized as ‘heavenly and serene, with [… a] devotion to purity and truth’ and in opposition to politics, a ‘profane and passionate [state], heaving with vulgar life’ (Pal 1990, p. 143). At the end of this study, it has become clear that these two cities have long been merged. At the outskirts, these two different extreme descriptions might still be valid pictures, but the vast centre cannot be classified that purely. The European Commission has purposefully built bridges across the chasm. It has understood that without science, its proposals will not be sound, yet without politics, they will not be implementable.

European Commission Climate Policy Policy Option Allocation Method Political Preference
These keywords were added by machine and not by the authors. This process is experimental and the keywords may be updated as the learning algorithm improves.
This is a preview of subscription content, log in to check access.

Cite this chapter as:
Dreger J. (2014) Conclusion: The Commission as a Catalyst between Knowledge and Politics. In: The European Commission’s Energy and Climate Policy. Energy, Climate and the Environment Series. Palgrave Macmillan, London. https://doi.org/10.1057/9781137380265_5