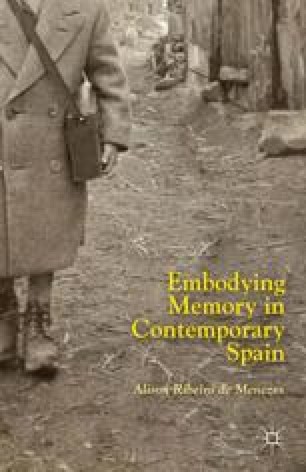 Modern Spanish culture has been described by Jo Labanyi as “one big ghost story,”1 and while this is an attractive notion, one must be careful, as we saw in chapter 3, not to aestheticize history or to imprison its agents and victims in the frame of a haunted and haunting narrative. Even so, as a lens through which to approach the long after-life of the Civil War and postwar eras, the ghost story—crucially, employed self-reflexively—has proved to be productive for a series of writers and film directors seeking to explore the return of the past “in spectral form.”2 Labanyi grounds her argument in Derrida’s historical-materialist reading of ghosts in Specters of Marx, although, as Colin Davis argues, Derrida’s work is not the origin of the notion of ghosts understood as traces of repressed and shameful secrets. Rather, Derrida’s specters gesture “towards a still unformulated future.”3 Indeed, for Sarah Wright, the logic of Derrida’s haunting suggests a defiance of such concepts as past and present, life and death, and so undermines traditional views of temporality.4 As we saw in the previous chapters, there are certainly silenced dimensions of Spanish history that have led writers to explore ways in which unmastered private, familial, and public pasts can be accessed culturally. However, the need to move on, and so to evade the stasis of traumatic repetitions, is important for any coming to terms with history’s specters.

Comic Strip Body Politic Black Humor Religious Rhetoric Franco Regime
These keywords were added by machine and not by the authors. This process is experimental and the keywords may be updated as the learning algorithm improves.
This is a preview of subscription content, log in to check access.