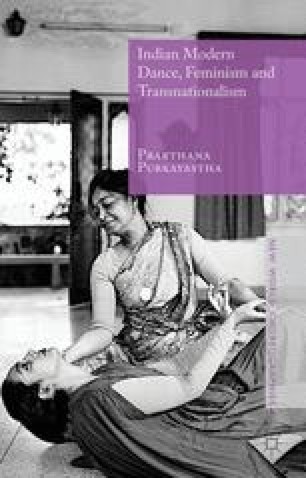 Indian Modem Dance is a research journey that initially grew out of two pressing concerns: the need to write Indian bodies into discussions on twentieth-century modern dance and the need to locate a genealogy of critical and political dance practice from the Indian subcontinent. During this journey, as I began to encounter traces of the past left behind in memories, writings, correspondences, photographs and films I began to realise how the dancing body complicates our understanding of Empire, Indian anti-colonial nationalism, transnationalism and ‘the woman question’. Further issues began to surface as I dug out old reviews, letters, reports, published works and visual documents from different archives. How does dance, as an embodied form of resistance to political and cultural nationalism, offer a nuanced view of imperial hegemony and the recalcitrance of its subjects? What are the intricate and intimate links that exist between dancing bodies, nationalist politics, international modernism and feminism in twentieth-century Indian performance? I explore these questions in this volume through the selected dance works made during the period 1900–2000 by five Indian artists: Rabindranath Tagore (1861–1941), Uday Shankar (1900–77), Shanti Bardhan (1916–54), Manjusri Chaki-Sircar (1934–2000) and Ranjabati Sircar (1963–99).

Classical Dance Postcolonial Theory Cultural Nationalism Creative Output Dance Form
These keywords were added by machine and not by the authors. This process is experimental and the keywords may be updated as the learning algorithm improves.
This is a preview of subscription content, log in to check access.