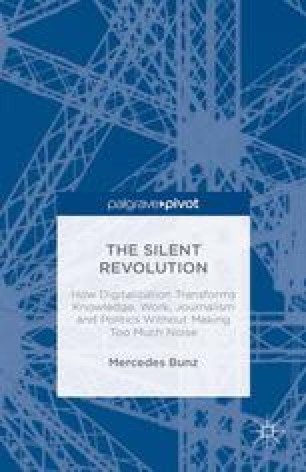 This chapter explores the role of technology as a second nature and contributes to discussions in philosophy of technology. In order to do this, it refutes the classic opposition of man and machine as well as the position of the human as a passive appendix to technology. Instead, it develops the concept of a ‘distributed agency’ by rereading the writings of Gilbert Simondon whereby two of his points are especially relevant: (1) human reality resides in machines as human actions fixed; (2) technology is always indeterminate as to function it needs to be open to an input. Using Google as an example to prove these points in praxis, it finds four disparate forces thatgenerally unfold with technology: beside the logic of its technical functionality, there are the social effects of a technological achievement, its application as a technology of power, as well as a more general and slowly changing historical structure which is different for a tool, a machine, or an algorithm, as each one comes with a specific technicalgesture which imposes a certain structure.