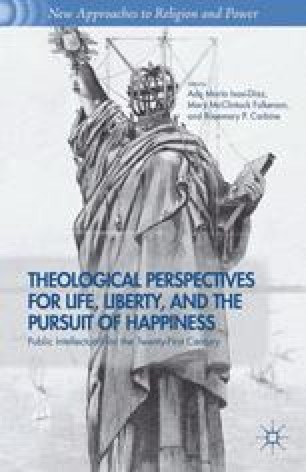 Theological Perspectives for Life, Liberty, and the Pursuit of Happiness pp 157-158 | Cite as

Ada’s closing essay is provocative for the future challenges set before public intellectuals. For example, take the deep ambiguity in the notion of “immigrants”; an honest telling of our nation’s history dispels the prominent myth that distinguishes between “us” and “them” and beckons us toward a new myth on the horizon, and indeed is already alive here. Without romanticizing any marginalized group, Ada reminds us of the richness provided this country when the great variety of lives and forms of wisdom, which inform the essays in part I of this book, are taken seriously. How can this richness be honored? How can there be a concern for the common good of all, rather than a militarist and competitive capitalist power-driven logic that diminishes the well-being of many? Society and government are entailed in our “nation” and the main question, as Ada insists, is how to get these fundamental realities to support and promote values that honor all humans, rather than repeat updated versions of the oblivious and destructive practices that harmed indigenous peoples, African Americans, Latinas/os, Asian Americans and other so-called alien groups.