The Politics of Extreme Austerity: Greece in the Eurozone Crisis 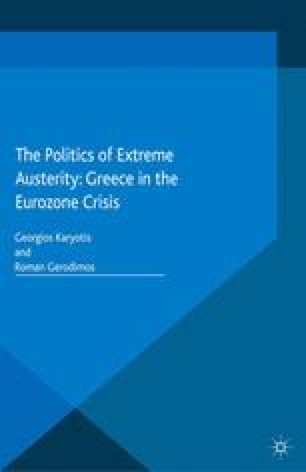 The Politics of Extreme Austerity: Greece in the Eurozone Crisis pp 46-68 | Cite as

‘The Good, the Bad and the Ugly’: Stereotypes, Prejudices and Emotions on Greek Media Representation of the EU Financial Crisis

The ongoing institutional and economic crisis of the E U has created new stereotypes, as well as facilitated the return of old prejudices across the member states, with important implications for the future of European integration. The crisis has generated broad media coverage challenging the reputations of countries most affected by the recession and those who bear the financial burden of bailouts. Characteristically, Greece has been often described as the ‘sick man of Europe’ (Exadaktylos and Zahariadis, 2014), while references to ‘the sinking euro’, ‘lazy Greeks’, ‘hard-working Germans’ and ‘detached Brits’ are frequently hosted in headlines, news reports and editorial commentary in newspapers across Europe (e.g.. Der Spiegel, 2011; EU Observer, 2011; Forbes, 2011; The Economist, 2011).

External Actor Political Elite Public Intellectual Opinion Piece Public Agenda
These keywords were added by machine and not by the authors. This process is experimental and the keywords may be updated as the learning algorithm improves.
This is a preview of subscription content, log in to check access.

Cite this chapter as:
Capelos T., Exadaktylos T. (2015) ‘The Good, the Bad and the Ugly’: Stereotypes, Prejudices and Emotions on Greek Media Representation of the EU Financial Crisis. In: Karyotis G., Gerodimos R. (eds) The Politics of Extreme Austerity: Greece in the Eurozone Crisis. New Perspectives on South-East Europe. Palgrave Macmillan, London. https://doi.org/10.1057/9781137369239_4