Aristotle on Method and Metaphysics 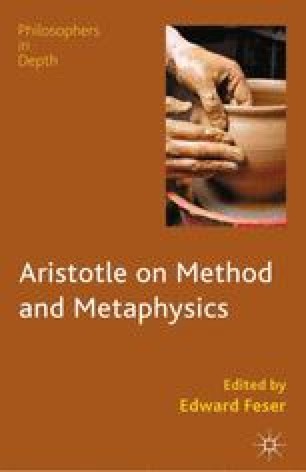 In Book Lambda of his Metaphysics, Aristotle presents an argument for the uniqueness of the universe.1 He derives the conclusion from the fact that the Prime Mover must be one both in formula (λογω) and in number (άριθµω). This is so because the primary essence (τò πρωτον τò τί ην ειναι) has no matter; it has no matter because it is actuality (εντελέχεια). So, since the Prime Mover is the cause of the single everlasting motion that explains the motion of everything that moves, there can be only one universe. If there were more than one universe, then there would need to be more than one Prime Mover. The reason that this is impossible is that if there were more than one Prime Mover, then these would somehow have to differ from each other. If this were the case, then there would have to be a principle of difference, either matter or something that functions like matter. So, on this scenario, these putative Prime Movers could be the same insofar as they had the same nature, but they would have to differ insofar as the “matter” of each differed (if only numerically) from the other. But the Prime Mover can be nothing but actuality. For, if it were actuality “plus” some matter, then it would have a potency for change of some sort. But if it could change, this change would either be locomotion, or it would depend on locomotion of some sort, since locomotion is the basis for all change.2

Prime Mover Real Distinction Active Potency Dependent Existence Unlimited Power
These keywords were added by machine and not by the authors. This process is experimental and the keywords may be updated as the learning algorithm improves.
This is a preview of subscription content, log in to check access.