Book Destruction from the Medieval to the Contemporary 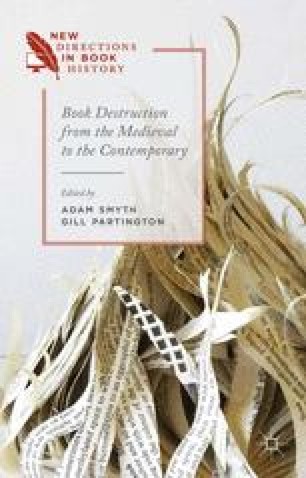 Burning Sexual Subjects: Books, Homophobia and the Nazi Destruction of the Institute of Sexual Science in Berlin

The Nazi book burnings are one of the defining moments both in the modern history of the book and twentieth-century history more broadly. Historians of Nazism have paid considerable attention to their role in the escalation of Nazi terror and its Anglo-American reception.1 Other critiques of violence and hatred have similarly turned to the events of 1933 to ask what it is, to borrow the words of Rebecca Knuth, ‘about texts and libraries that puts them in the line of fire during social conflict?’2 Knuth answers her own question by pointing to the crucial role of books in collective identity formation and its sustenance. ‘As the voice and memory of the targeted group’, she argues, ‘books and libraries are central to culture and identity [and] vital in sustaining a group’s uniqueness’.3 For Knuth and many other critics, books are the material correlative of an established cultural identity, and book burnings constitute the attempt to eradicate it. This line of investigation, which has productively examined the symbolism of burning books — including the fact that it has a limited function as an act of censorship — tends to focus on the losses incurred in the act of destruction. In contrast, I want to turn attention to the remains: the documents and objects which survived the Nazi attack on books in the raid on Magnus Hirschfeld’s (1868–1935) Institute of Sexual Science in Berlin.

Nazi Regime Street Cleaner Gender Reassignment Surgery Intersex Patient Pink Triangle
These keywords were added by machine and not by the authors. This process is experimental and the keywords may be updated as the learning algorithm improves.
This is a preview of subscription content, log in to check access.

Cite this chapter as:
Bauer H. (2014) Burning Sexual Subjects: Books, Homophobia and the Nazi Destruction of the Institute of Sexual Science in Berlin. In: Partington G., Smyth A. (eds) Book Destruction from the Medieval to the Contemporary. New Directions in Book History. Palgrave Macmillan, London. https://doi.org/10.1057/9781137367662_2