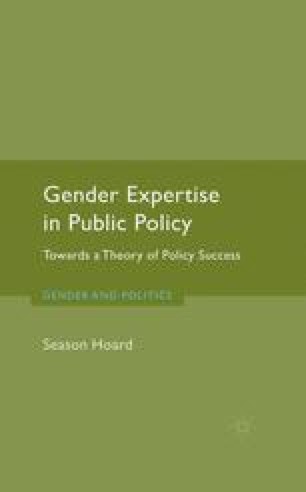 Locating the Experts: Identifying the Actors, Mapping the Terrain

Chapter
Part of the Gender and Politics book series (GAP)

In September of 1995, the Commission on the Status of Women and the United Nations Division for the Advancement of Women (DAW) organized the Fourth World Conference on Women in Beijing. The focus of the conference was the advancement of women in several areas, including human rights, poverty, decision making, and violence against women, as well as other areas of concern (United Nations n.d.). The Beijing Conference was attended by a number of NGOs and media representatives, and 189 governments participated in the forum, which resulted in The Beijing Declaration and Platform for Action (United Nations n.d.). The Platform for Action signified international commitment to the advancement of women through several measures, including a unanimous agreement to “design, implement and monitor, with full participation of women, effective, efficient and mutually reinforcing gender-sensitive policies and programmes” (United Nations Department of Economic and Social Affairs 1997). One important result of the Fourth World Conference on Women was the adoption of gender mainstreaming as a strategy to combat gender inequality and consequently increase political support and visibility of gender equality policies worldwide.

Gender Equality Civil Servant Policy Process Institutional Location Policy Debate
These keywords were added by machine and not by the authors. This process is experimental and the keywords may be updated as the learning algorithm improves.
This is a preview of subscription content, log in to check access.