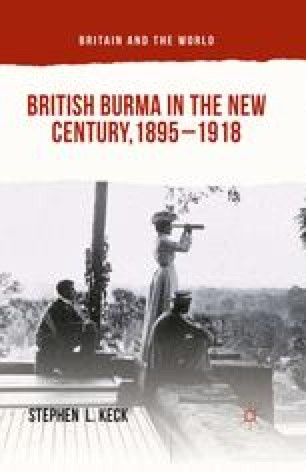 A Burmese Loneliness reveals C.M. Enriquez’s attempts to make sense of his experiences in British Burma. Writing with the hope that the Great War would end soon, he was clear that Burma had a good future, and like so many others he believed that this required sustained British tutelage. He referred to a ‘new way’ for Burma; his concept included education in all senses—moral, professional and institutional:

[W]e wish to lead our younger Burman brother … The Burmese have to learn all about geology, engineering, forestry, and chemistry. They have to bring a University and High Courts into existence. They have to establish and extend the powers of their ‘Archbishop’ the Thathana Baing, lest Buddhism and the monks as a whole fall into disrepute for lack of control. They have to learn too, how inestimably valuable their old lore and literature is, and they must retain everything good that they have evolved.1

British Colonialism High Court British Rule Gold Leaf Word Picture
These keywords were added by machine and not by the authors. This process is experimental and the keywords may be updated as the learning algorithm improves.
Download to read the full chapter text