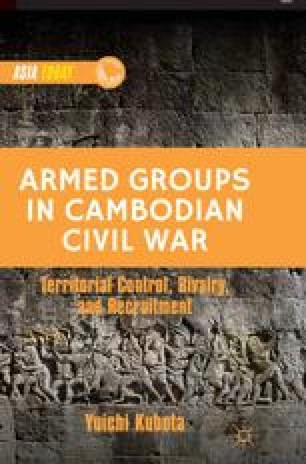 The purpose of this chapter is to explore mobilization of combatants by armed forces in the Cambodian civil war, 1970-75. Mobilization strategies varied according to armed group and contexts of the civil war. The war allows us to capture the diversity of structural contexts and the groups’ efforts in recruitment. In the civil war, two main armed groups, the Lon Nol government and the Khmer Rouge, competed for popular support and recruits. This chapter examines mobilization strategies of these groups despite recognition that external actors, such as the United States and North Vietnamese forces, gave patronage to Lon Nol and the Khmer Rouge forces respectively.

Armed Force Armed Group Popular Support Coercive Measure Khmer Rouge
These keywords were added by machine and not by the authors. This process is experimental and the keywords may be updated as the learning algorithm improves.
This is a preview of subscription content, log in to check access.