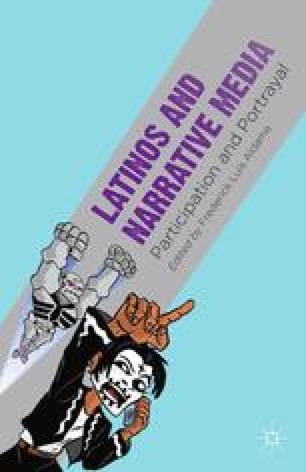 In 2010, the science fiction (sci-fi) television series Caprica (2010–2011) and The Event (2010–2011) introduced audiences to televisual spaces that placed central emphasis on illegally and legally residing extraterrestrials trying to survive and thrive among residential inhabitants. While such storylines sound all too familiar, both series relied heavily on rather unique representations of phenotype and language, which were projected through specific characters to push their sci-fi storylines. Furthermore, “the relationship between race and sf has been largely overlooked by scholars” (Lavender, III, 10) countless number of times, with the directorial deliberateness of phenotype and language even further removed from purely racial explorations. Director Evan Katz, for example, sets The Event in the near future, with the fate of the American free world, and planet earth for that matter, in the hands of legally residing Afro-Latino Cuban American president Elias Martinez (played by Blair Underwood) as he battles human-like illegally residing aliens. Likewise, Ronald D. Moore introduces viewers to Caprica City, a planet where technological advancements not only make it a residential Mount Olympus for its Caprican residents, but is also the site of interplanetary racism and bigotry endured by refugee resident Taurons. The Graystone and Adama families consume much of the respective series’ story lines and function to solidify the social and racial hierarchies and differences in Caprica City—and beyond.

Foreign Language Science Fiction Initial Episode Intergroup Contact Formal Device
These keywords were added by machine and not by the authors. This process is experimental and the keywords may be updated as the learning algorithm improves.
This is a preview of subscription content, log in to check access.