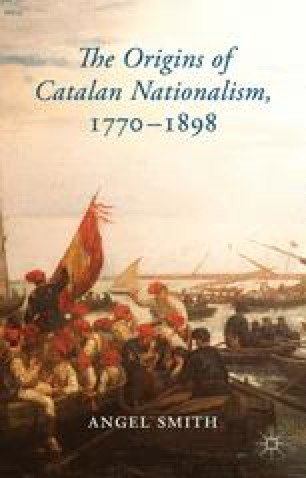 The Catalan Haute Bourgeoisie and the State, 1875–98

Catalanism would become further radicalized from the early 1880s and a nationalist movement would emerge at the end of the decade. In the 1960s and 1970s a number of Marxist historians put forward the argument that, unable to construct the Spanish nation and state in its own image, from the mid-1880s the bourgeoisie (through its ‘organic intellectuals’) either led or took over the construction of an alternative Catalan nationalist project.1 This analysis represented an adaptation to Catalan and Spanish conditions of the classic Marxist position that nationalism was a product of the newly dominant national bourgeoisie’s efforts to build its own state and construct a national market.

Political Elite Business Association Liberal Party Conservative Party Catalanist Movement
These keywords were added by machine and not by the authors. This process is experimental and the keywords may be updated as the learning algorithm improves.
This is a preview of subscription content, log in to check access.