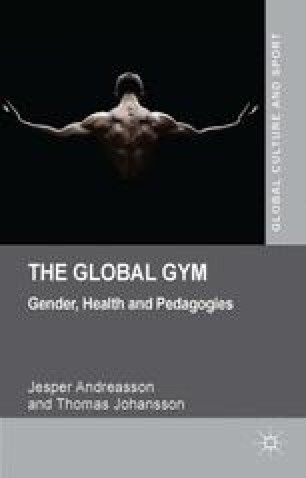 During the past four decades, gym and fitness facilities have emerged as a global industry. According to the International Health, Racquet & Sports Club Association (IHRSA), which is the trade association serving the health and fitness club industry, this global “movement” generated an estimated $75.7 billion in revenue in 2012, from more than 153,000 health clubs serving 131.7 million members (IHRSA, 2013). By promoting active lifestyles, gym and fitness facilities are presented worldwide as the solution to all sorts of public health issues. The list of countries that have been affected by this development is long. In Sweden, for example, where the sports movement has traditionally assumed responsibility for voluntary physical education for children and adolescents, gym and fitness training activities have advanced to play a significant role in promoting health and bodily exercise. In Great Britain, memberships in private fitness clubs have risen steadily during recent decades, and a public survey shows that at the beginning of 2000, 14 per cent of the population attended a gym (Crossley, 2006). These figures are well in line with studies of the health club population in the United States as well (Sassatelli, 2011), and seem to be increasing continuously, spurred especially by strong commercializing forces (Smith Maguire, 2008).

Subject Position Empirical Material Personal Trainer Health Club Physical Culture
These keywords were added by machine and not by the authors. This process is experimental and the keywords may be updated as the learning algorithm improves.
This is a preview of subscription content, log in to check access.