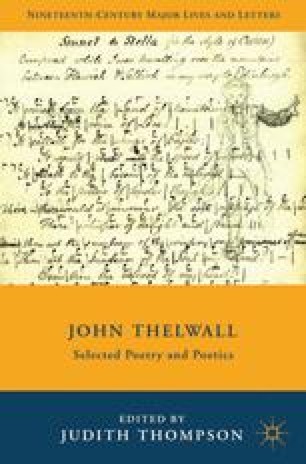 The pastoral was fundamental to Thelwall’s revisionary, re-creative poetics. As deeply as any of his contemporaries, he is a romantic poet of nature, though his “nature” is closer to that ofthe CockneyPoets, reflecting his London upbringing, than it is to that of the Lake Poets whom he wished to join but also critiqued from the neighboring market-towns and industrial valleys that supported his itinerant lecturing career.’ Such a debate between the rural and the (sub)urban is characteristic of the “Bermondsey pastoral” that he defended in The Peripatetic, in which he decried the “rustic” gentrification that created urban slums. It is consistent with the principles of a radical who responded to the “Revolution Controversy” (Butler) of the 1790s with a book entitled The Rights of Nature. Thelwall did not need to be reminded that the pastoral has always been a site of ideological debate (Patterson); his nature is not an escape from politics, but the foundation of it.

Urban Slum Ideological Debate Romantic Poet English Pastoral Love Poem
These keywords were added by machine and not by the authors. This process is experimental and the keywords may be updated as the learning algorithm improves.
This is a preview of subscription content, log in to check access.