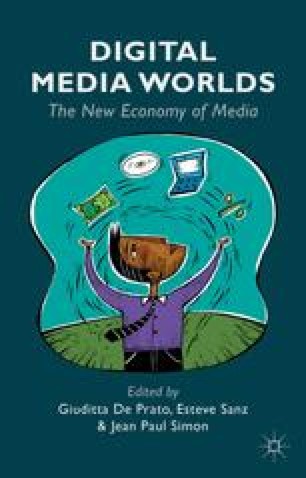 This chapter delves into recent developments in the film industry (or sector) with specific attention to the evolution in a context of digital ‘dematerialization’. We focus here on those companies involved in value-adding activities (from production, through distribution and marketing, to exhibition; see also below) with regard to feature films. These are typically defined as films with a runtime of more than one hour and intended for theatrical release1 (see, for example, EAO, 2010: 8). This choice relates to our starting point, which is the traditional film sector as it developed historically, built around a theatrical release that has gradually expanded to include non-theatrical delivery channels. This chapter looks at the changes that digitization has brought for this traditional organizational model. We do recognize that, increasingly, the boundaries between the different types of content and their exhibition are blurring (e.g. when feature films are only very briefly theatrically released, when user-generated content (UGC) is programmed as ‘alternative content’ on a cinema screen, etc.).

Theatrical Market Film Industry Copyright Infringement Home Video Digital Cinema
These keywords were added by machine and not by the authors. This process is experimental and the keywords may be updated as the learning algorithm improves.
This is a preview of subscription content, log in to check access.