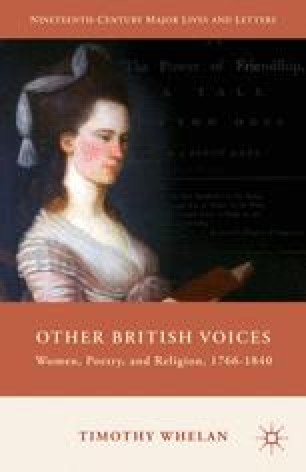 Other British Voices presents the lives and writings of four women who comprised the heart of the second generation of what is now known as the Steele circle. This circle of nonconformist (primarily Baptist) women writers originated in the West Country of England in the early 1700s and eventually stretched to Bristol, Southampton, London, and Leicester. The first generation was led by the diarist Anne Cator Steele (1689–1760), wife of William Steele III (1685– 1769), Baptist minister at Broughton, Hampshire; she was joined by her talented stepdaughter and poet, Anne Steele (1717–78), who published Poems on Subjects Chiefly Devotional in 1760 under the nom de plume “Theodosia,” and another daughter, Mary Steele Wakeford (1724–72), also a gifted poet. The central figure in the second generation was Mary Steele (later Dunscombe) (1753–1813), Anne Cator Steele’s granddaughter and Anne Steele’s niece, author of Danebury: or The Power of Friendship, A Tale. With Two Odes, which appeared anonymously in 1779. The younger Steele’s reputation as a poet, though eclipsed by (and later confused with) that of Anne Steele, was sufficient to sustain her own coterie of literary friends, including Mary Scott (later Taylor) (1751–93) of Milborne Port; Somerset, author of the poems The Female Advocate (1774) and Messiah: A Poem (1788); Jane Attwater (later Blatch) (1753–1843) and her sister, Marianna Attwater (later Head) (1742?–1832), of Bodenham, near Salisbury—the former a prolific diarist and the latter a clever poet; and Elizabeth Coltman (1761–1838) of Leicester, Mary Steele’s closest literary friend after the death of Mary Scott and who was herself a poet, periodical writer, and author of moral and political tracts between 1799 and 1820.

Eighteenth Century Woman Writer Female Advocate Life Writing West Country
These keywords were added by machine and not by the authors. This process is experimental and the keywords may be updated as the learning algorithm improves.
This is a preview of subscription content, log in to check access.