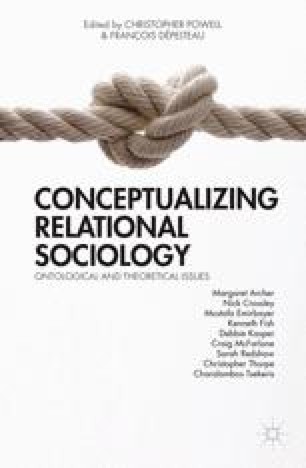 When I first encountered the term “relational thinking” back in the early 1990s, it had the quality of fighting words. Established social thinkers such as Charles Tilly, Pierre Bourdieu, and Harrison White, not to mention younger scholars such as Margaret Somers and Peter Bearman, among others, were deploying it as a weapon against alternative approaches and schools of thought, including statistical regression-based approaches (such as those prominent in status attainment research); rational choice theory and other economistic perspectives; categorical approaches that highlighted shared attributes rather than location in relational settings or configurations; monological accounts (Bourdieu spoke of the “village monograph”) that failed to think in dialogical or field-theoretic terms; and any number of other conventional, dominant approaches to sociological inquiry. All who called for a relational reorientation of sociology were crafting sharply worded critiques. All regarded themselves as engaged in intellectual contestation. All were concerned to do battle against intellectual opponents.

Relational Setting Rational Choice Theory Sociological Inquiry Shared Attribute Ethnographic Fieldwork
These keywords were added by machine and not by the authors. This process is experimental and the keywords may be updated as the learning algorithm improves.
This is a preview of subscription content, log in to check access.