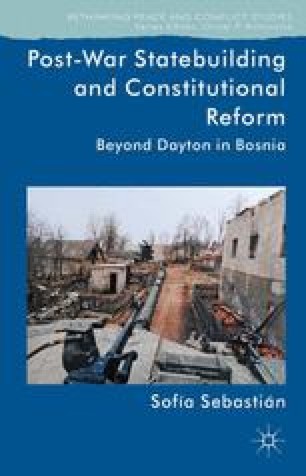 Since the signing of the General Framework Agreement for Peace (GFAP) in 1995 that put an end to the civil war in Bosnia, both the implementation of the peace agreement and the building of a functional state have encountered strong local obstruction. In 2000, statebuilding was formally linked to the process of EU accession in the belief that the EU pull would encourage local actors to cooperate with one another in strengthening and consolidating the state. It was believed that the prospect of EU membership would provide enough incentives for ethnic leaders to set aside their differences and work together towards the common European project. At the core of this approach was the liberal notion that economic and social stabilization, through European integration, could bring peace dividends and, in turn, serve to undermine group divisions. Although progress was achieved in certain areas (especially in 2004, which gave internationals a sense of confidence in Bosnia’s readiness to achieve full domestic ownership), this was the result of heavy external arm-twisting, and, oftentimes, outright imposition by the High Representative (HR).

External Actor Reform Process Party Leader Peace Agreement Constitutional Reform
These keywords were added by machine and not by the authors. This process is experimental and the keywords may be updated as the learning algorithm improves.
This is a preview of subscription content, log in to check access.