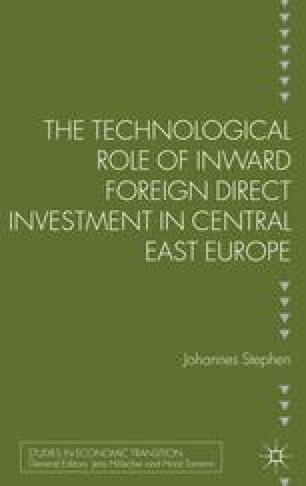 The Database Used in the Empirical Analysis

Traditionally, research on FDI analyses bilateral country-level aggregate data on FDI flows (in much the same way as in the introduction). However, the empirical analysis of the technological role of FDI for economic development in host countries (technology transfer and spillover effects) usually uses the method of production function analysis, based on aggregate industry-level data on FDI stocks combined with estimates of inter-sectoral linkages derived from national-level input- output tables. Some production function analyses rely on firm-specific data using official databases or field work. The traditional method of analysis does not take firm heterogeneity into account, and hence remains unable to explain large fractions of the variance in resulting technological roles between the various FDI projects that exist in host countries. The latter is, however, typically restricted in its comparative strength, because the methodology behind the firm-specific databases varies between the different countries where such data is available. Moreover, official statistics seldom contain information about the most important determinants of the research issues at hand (determinants of the technological role), because they are typically not easily measured in hard facts, but rather involve subjective valuations of managers of firms to be considered in the analysis.

Foreign Direct Investment Foreign Investor Foreign Affiliate Computer Assisted Telephone Interview Technological Role
These keywords were added by machine and not by the authors. This process is experimental and the keywords may be updated as the learning algorithm improves.
This is a preview of subscription content, log in to check access.