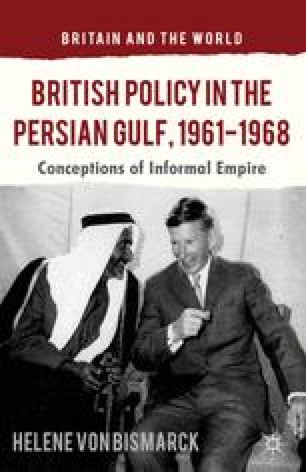 The Kuwait Crisis and Its Consequences

In May 1961, Sir William Luce took up office as the new political resident in the Persian Gulf.1 He was not a career diplomat but had served in the Sudan Political Service for 26 years, before being seconded to the Colonial Office as Governor of Aden from 1956 to 1960.2 The Foreign Office took the occasion of his appointment to Bahrain to re-examine Britain’s policy aims in the Persian Gulf, focusing particularly on the question of whether the relationship between the British Government and the rulers of the Gulf States, along with Britain’s military presence, continued to be the best means of protecting British interests in the region. The results of this debate were conveyed to Luce in a despatch from Lord Home, the secretary of state for foreign affairs.3 Despatch No. 77, which explained Britain’s responsibilities and interests in the Gulf before outlining the tasks Luce was expected to perform as political resident, mirrored the conception of Britain’s informal empire in the Persian Gulf region that prevailed in the Foreign Office on the eve of Kuwait’s formal independence.

Saudi Arabia United Nations Arab World Protected State Military Presence
These keywords were added by machine and not by the authors. This process is experimental and the keywords may be updated as the learning algorithm improves.
This is a preview of subscription content, log in to check access.