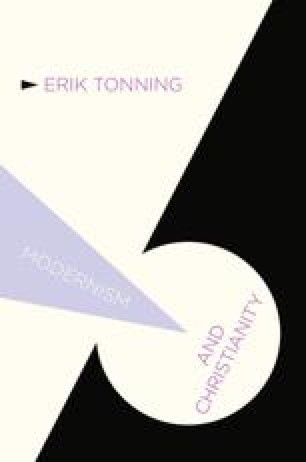 Modernism and Christianity pp 25-58 | Cite as

The phrase ‘Catholic Modernisms’ should give the reader pause. The Catholic Church at the beginning of the twentieth century waged a very public campaign against theological ‘modernism’, defined in Pope Pius X’s 1907 encyclical Pascendi Dominici Gregis as agnosticism regarding knowledge of God (devaluing revelation, scripture and dogma), and as ‘vital immanence’ — the association of God, not primarily with a pre-existing supernatural order, but with a human desire for the divine that can attach itself to various symbolic forms as it evolves through time. What, if anything, does the battle over theological modernism have to do with the cultural Modernism (capitalized throughout this study) of a novelist such as James Joyce, or a poet and painter such as David Jones?28 Furthermore, if Joyce, in his own words, ‘left the Catholic Church, hating it most fervently’, proceeding to ‘make open war upon it by what I write and say and do’,29 is it not (as Geert Lernout has recently argued) pointless for the critic to somehow drag this determined anti-Catholic back into the fold by labelling him a ‘Catholic’ Modernist? Contrariwise, how could Jones — a Catholic convert whose faith was undeniably central to his aesthetics, to his painting and to the palimpsestic poetry of In Parenthesis (1937) and The Anathemata (1952) — choose to associate himself both with a Church so apparently hostile to all ‘modernism’, on the one hand, and with cultural-Modernist artistic influences such as Joyce himself, on the other?

Cultural Modernist Barnacle Goose Western Modernity Catholic Theology Free Love
These keywords were added by machine and not by the authors. This process is experimental and the keywords may be updated as the learning algorithm improves.
This is a preview of subscription content, log in to check access.