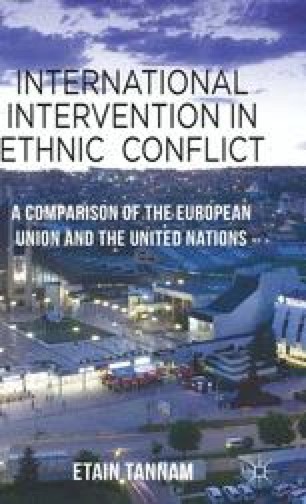 In 1998, Northern Ireland became the poster child for international intervention, when the Good Friday/Belfast Agreement (GFA) was signed, bringing the 30-year violent conflict to an end. While the UN was not involved in conflict resolution in Northern Ireland, the EU heralded the GFA as an example of the EU’s ameliorating role. It was observed that ‘without the embedding of both states in the wider system of European integration and without the models of politics offered by the EU, it is unlikely that both states and other political actors could have found the political capacity and the institutional models to craft the Good Friday Agreement’ (Laffan, 2003, p. 14). Indeed, in 1998, Northern Ireland was the only example of a successful peace process within the EU, for which the EU took some credit.

Peace Process Irish Government International Intervention Peace Programme Irish Preference
These keywords were added by machine and not by the authors. This process is experimental and the keywords may be updated as the learning algorithm improves.
This is a preview of subscription content, log in to check access.