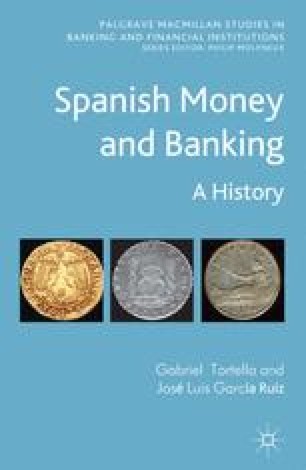 The loss of the colonies in America (Cuba, Puerto Rico) and Asia (Philippines) in 1898, at the hands of the United States, was a blow to the Spanish collective consciousness. But there was reaction to the ‘Disaster of 1898’ and Spain soon evolved from complaining about the males de la patria (woes of the fatherland) to facing problems boldly (Velarde, 1999; Maluquer de Motes, 1999). The liberal-conservative minister Raimundo Fernández Villaverde drew up a successful stabilization plan in 1899–1900 based upon a tax reform which balanced the budget for almost a decade (a record in modern Spanish history) and even provided a project of income tax (Comín, 2002). Villaverde’s plan also permitted a substantial reduction in the volume of public debt. Some thought, however, that the reform had to go further and put an end to the ‘soft nationalization’ that had characterized nineteenth-century Spain (De Riquer, 1994). According to this school of thought (the regeneracionistas), it was necessary to espouse a newly minted Spanish nationalism, recognizing regional differences but at the same time pursuing the integration of the Spanish market and giving the state a greater role in economic modernization.

Central Bank Public Debt Basque Country Private Bank Foreign Bank
These keywords were added by machine and not by the authors. This process is experimental and the keywords may be updated as the learning algorithm improves.
This is a preview of subscription content, log in to check access.