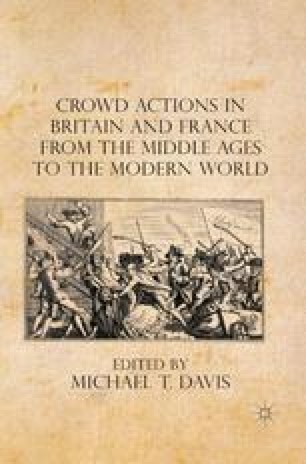 ‘Reformers No Rioters’: British Radicalism and Mob Identity in the 1790s

On 27 August 1794, Lydia Hardy — the wife of the founder of the London Corresponding Society (LCS), Thomas Hardy — died within hours of giving birth to a stillborn baby. Two days later, when the impending funeral of Mrs Hardy was discussed at a meeting of a central committee of the LCS, one prominent member — James Parkinson, a physician probably best remembered for first describing what is now known as Parkinson’s disease — raised the question of whether or not the LCS should make an effort to be represented en masse at the mournful event. Another member opposed the idea, arguing that it gave ‘an opportunity to our Enemies to observe upon our calling together so great a Number of people as would attend that it indicated the Society’s inclination upon every occasion offer’d, to collect a Mob, and to renew the tumults and riots which had so lately prevailed’.1 This apprehension about the potential for the LCS to be publicly perceived as a mob ultimately informed and shaped the LCS’s official instructions for the funeral of Lydia Hardy. There was no call for a collective gathering of the LCS, and it was ‘recommended to each Member who knew Citizens that meant to attend the funeral earnestly to recommend to them to behave peaceably and becoming the solemnity of the occasion’. When it was all over, the LCS wanted to avoid any risk of a disturbance and recommended those members who did attend should ‘disperse each to his own home immediately after the funeral’.2

French Revolution British Library British Radical Collective Violence Habeas Corpus
These keywords were added by machine and not by the authors. This process is experimental and the keywords may be updated as the learning algorithm improves.
This is a preview of subscription content, log in to check access.