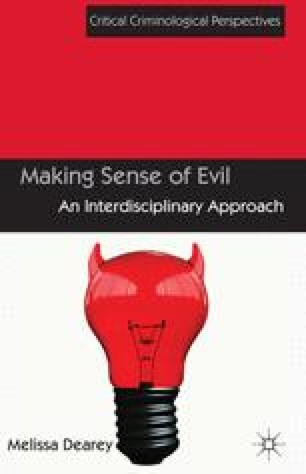 In the previous chapter, we examined the problem of evil as represented in the theodicy, or how to reconcile the reality of evil in the world with the existence of God who is all powerful(ish) and absolutely good (ish, or possibly wicked). As we saw there, evil in theodicy is regarded as diametrically (if not also diabolically) opposed to the good, or a privation of the good from a rational point of view, whether conceived of in terms of logic, knowledge or power—very much prized and very human attributes in modernity. The somewhat paradoxical result is that evil in theodicy often turns out to be indistinguishable from the good, or else what becomes to be regarded as ‘the good’ takes evil to previously unknown levels of excess, whereby some theodicies (e.g. the Malthusian theodicy) advocate a perverse rationalization of human suffering on a massive scale. On this logic, something like pre-marital sex is regarded as evil and sinful because it violates God’s law whereas the deaths of millions from starvation, war and genocide should be condoned as ‘good’. As Max Weber noted in his landmark analysis of the Protestant work ethic, such rationalizations of evil serve potent ideological functions in terms of legitimating the oppression and exploitation (if not actual destruction) of whole populations in modern global cap-italism, as well as striking fear in the hearts of believers about evil and the destiny of their eternal souls.

Seventeenth Century Modern Philosophy Early Modern Period French Philosophy Evil Demon
These keywords were added by machine and not by the authors. This process is experimental and the keywords may be updated as the learning algorithm improves.
This is a preview of subscription content, log in to check access.