The Globalization of Strangeness 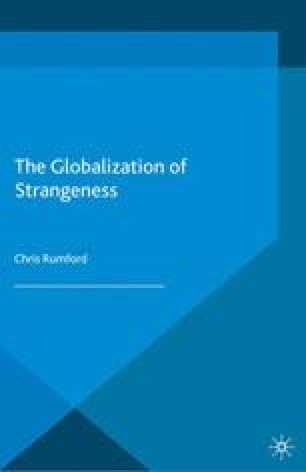 The Globalization of Strangeness pp 35-54 | Cite as

I start this chapter with a personal reflection. Coming across the passage quoted below — in which Beck gives outline form to his idea of the globalization of strangeness — was important for the development of this book in several ways.1 First, it encouraged my belief that others may see strangeness in the same way that I do, which up to that point was looking extremely unlikely. The globalization of strangeness may not yet be a recurring theme in the social sciences, but at least there is evidence of it emerging in the literature. Second, I was excited by the fact that another social theorist was offering an alternative (and critical) perspective on the figure of the stranger, too often treated uncritically in the literature. Third, it was good to know that a writer with whose work (on cosmopolitanism, particularly) I was already familiar was ‘speaking’ to me in a language I could so clearly understand. It seemed to me, for a brief moment anyway, that I was the intended reader of this passage, which seemed to simultaneously confirm my views on the relationship between globalization and strangeness, subtly challenge them, and direct my thinking in new and productive directions. Fourth, as usual when reading Beck’s work I was both excited by the possibilities it opened up and aware that despite the beguiling formulation it might quite possibly be wrong. The more I read the passage the more I am confirmed in this view. But I cannot deny the impact of this short section on my thinking at a crucial stage of writing this book. Although Beck formulates his ideas on strangeness in more sophisticated terms elsewhere in his work (as discussed later in the chapter) there is an urgency and economy of words here which makes the force of the ideas contained all the more powerful. Fifth, coming across the passage almost by accident, and not previously being aware of its existence, reminded me that internet searches can occasionally be serendipitous.

Mobile Pattern Gated Community Risk Society Familiar Place Halal Meat
These keywords were added by machine and not by the authors. This process is experimental and the keywords may be updated as the learning algorithm improves.
This is a preview of subscription content, log in to check access.